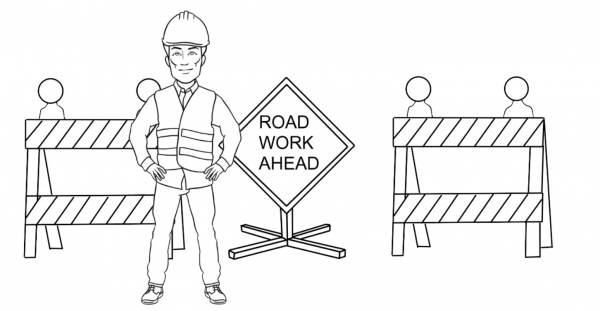 The roads of the UK are the arteries of the economy and the pathways for society. Currently they are clogged up at peak times, such as during the school runs and when people finish work, however generally empty during the night. The UK lose millions in delays due to traffic jams, millions in the cost of accidents caused by congestion, and huge amounts of unnecessary lost time by the road users. We at NONPOL do not believe the solutions is to build more roads or widen roads or turn all motorways into Smart motorways, that is fixing the symptoms and not addressing the root cause. We believe a better solution is to address the root cause and at the same time try to raise more revenue through our road systems. Our objective is a high-quality high availability road system.

We would encourage all heavy haulage, everything over 7.5 tons, to travel between the hours of 9pm and 7am. For deliveries at night many large businesses would need to be open during the night to receive deliveries. This also supports NONPOL economic strategy for moving to a 24 by 7 economy. Truck drivers will need Greggs, Starbucks, Asda, Morrisons and MacDonalds etc open during the night, creating a whole new night economy. In time all main businesses would run 24 by 7 just to support the trucking industry but over time a whole new 24 by 7 economy would emerge, leading to full employment, a 4-day week and a very strong financial economy. Smaller businesses, such as dentists, opticians, hairdressers, etc opening at night would be given grants or financial incentives to do this.

Haulage drivers that have been driving for years may resist this approach, however the new generation of drivers are already aware of the global 24 by 7 world we live in. To increase take up of this strategy we would offer numerous financial incentives to encourage pushing haulage to overnight hours. To run during the day hours, a truck would need a day-time vignette. For night running there would night-time vignette at a fraction of the cost of the day vignette. A truck can have day or night vignettes or both. There would be fines for trucks that did not have the correct vignette, which would be registered to their license plate and checked via ANPR. All foreign trucks entering the UK would have to have an annual vignette for both day and night before entry into the country. UK trucks with a night vignette can receive fuel at 40% discount at government filling stations, upto 200 litres; however, that truck cannot run during the day for four days following the fill up, but any time in night hours. The vignette revenue would pay for the fuel discounts. Our goal is to balance the road traffic over 24 hours and fix the current road system rather than spend billions on road widening and dangerous Smart motorways. Additional incentives such as Government run truck parks open through night hours where truckers would get extensive and cheap deals on food, accommodation and other essential services.

With regards to general motoring, any accidents or bad driving resulting in damage where the cleanup or repair of road hardware is at the cost to the country, the person responsible will have to pay for the costs of making good. This would not be covered by insurance. Cyclists would have a registration number similar to cars. Cyclists that haven’t passed a proficiency test, would show a beginner’s plate. All bicycles would require insurance and failure to comply with road regulations or not have alights on at night would lead to endorsements orconfiscation of the bike. All children on bikes under the age of 16, would be beginner cyclists and would have their bikes covered by their guardian’s insurance. Anyone under the age of 16 cannot cycle in the dark without an adult present. Cyclist not registered or parked without a registration will be confiscated. The revenue received from the new cycling initiative would go towards building more cycle paths and cycle awareness in schools.

With regards to parking, we would pedestrianize more city and town centres, but offer free parking within walking distance of the towns and city centres. Beside encouraging people to walk more it would stop city congestion and breathe new life into the high street. We would also look to enforcing parking charges on retail parks and invest this revenue into town centres that have been destroyed by retail parks.

As a final effort to optimize the UK Road and transport system we would set up Road and Transport commission that looks where there are problem with our current transport estate and systems. We would then look to see which countries have the best system in place and see where we could benefit. With Google maps and other emerging technologies and input from other countries, our goal would be to deliver the best road network and transport systems in the world.

Reference 2 – Article on Shortage of truck drivers from the BBC

Reference 3 – Tax on parking article from The Guardian